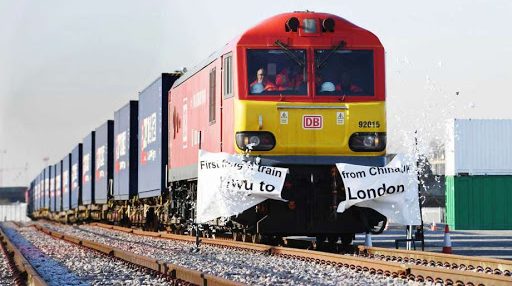 Will the UK find post-Brexit prosperity along China’s One Belt One Road?

It had travelled almost 12,000 kilometres from China, through Kazakhstan, Russia, Belarus, Poland, Germany, Belgium and France before entering the Channel Tunnel, arriving in Essex and heading towards the UK capital.

There was nothing remarkable about its cargo: 34 containers of clothing and consumer goods, the very stuff of international trade. The significance was that it had arrived at all, because this train from the non-descript city of Yiwu in Zhejiang Province represents the furthest reach of China’s trans-Asian infrastructure development plan, One Belt One Road (OBOR), also known as the ‘Belt and Road’ initiative.

With London now fixed geographically at the ‘end of the rainbow’ and confirmed in its position by the symbolic arrival of the train, the UK has been presented with its greatest international trading opportunity for a generation. The hugely ambitious initiative seeks to build economic growth and investment along the ancient Silk Road trading route by land, as well as its equivalent by sea.

It is safe to assume that this is the largest single FDI programme ever conceived. At $900bn, it dwarfs the 1946 Marshall Plan at a mere $16bn (or $130bn in today’s money). Sixty-five countries along the OBOR routes account for 63% of the world population and 29% of global GDP, and China is seeking to grow international trade along the route by $1500bn in the next decade.

While the battle for Brexit has left in its wake a crisis of self-confidence in the British political establishment, the UK should be asking how it can take advantage of this great economic benediction. The answer lies in the three assets that underpin the country’s global potential. These unique selling points, developed over hundreds of years by skill, luck, trial and error, are the English language, the common law system and British education.

The Chinese ambassador to London, Liu Xiaoming, certainly agrees, saying: “Britain is a country of global influence and can be an important partner for China in OBOR. Britain has many strengths and unique advantages that could give it a head start in OBOR co-operation.”.

This is part of a growing international recognition of core strengths that are directly relevant to the world in general and OBOR in particular. The UK needs to exploit its ascendancy in services, finance, law and education along polyglot trade routes where English is the lingua franca. OBOR then can become transformative: $2500bn trade routes bookended by Chinese capital and British language, law and learning.

English as a language has descended from Indo-Germanic origins; at 1400 years old, it is a relative newcomer compared with the Chinese language, which developed between the 8th and 3rd centuries BC. English has come a long way since, and now boasts as many as 500 million speakers.

This is still small compared with Chinese with more than 1 billion speakers, but its relevance to international trade lies in its ubiquity. David Crystal in his definitive work English as a Global Language asserts that there are 50 countries where at least one-third of the population speaks English. Twenty are on OBOR routes, including the most populous, India, and English is now the main worldwide language of diplomacy and international relations.

While it is true that only about 10 million Chinese speak English fluently, it is the foreign language choice of a staggering 93% of Chinese school children. French is a distant third, after Russian, at 0.3%. Language is not merely a cultural asset, it is critical for business, particularly in the service sector, which hinges on personal interaction and communication.

This is a great strength of the UK economy, contributing 79% of domestic GDP, but Barclays estimates that within a decade services should also account for half of Britain’s exports. This would place the UK in contention as a world leader in service exports. English is therefore the natural and enduring language for international trade along OBOR.

Common law spread across the world via the UK’s historic mercantile and colonial relationships. It is not only in Australia, US and India that versions can be found, but it also forms the basis of international maritime and public law, and has created the benchmark standard for corporate governance.

This system, where no major codification of the law occurs and judicial precedents are binding as opposed to persuasive, has been in place since 1189. It differs in form and function from European law, which is by its nature based on treaty, regulations and directives. Common law is flexible and pragmatic, but most importantly it is organic as it can operate without a central codifying authority.

Codified law works (just about) for the EU because it is a bloc and can organise itself with a central authority and judicial system. But as Yue Li, director of Chinese private equity giant Sanpower Group, observes, Chinese trade strategy is run “through lines, rather than blocks”, a perfect environment for common law. In the global market for legal services, the world seems to agree. According to the Law Society there are 86,000 lawyers in London and a remarkable 1760 lawyers in the City of London for every 1000 members of the population (yes, more lawyers than people).

The positive international view of the UK’s learning is founded on the perceived qualities of UK private secondary schools (confusingly known as public schools) and the prestige of UK universities. The culture of independent learning, academic rigour, character development, and the potential for lifetime networks, make public schools the education of choice. These institutions have developed beyond the era of cold showers and chalk dust to a fitting nursery for the world’s elite.

Enterprising students, and perhaps more importantly their ambitious parents, have noticed that the UK hosts three of the top 10 global universities, including the world number one, Oxford University. These have become a magnet for global leadership and have created an education economy worth £25bn ($32.2bn) a year in GDP. It is therefore unsurprising that the UK is first choice for secondary education (about 35%) and second only to the US (about 25%) for Chinese young studying abroad at tertiary level. In the year up to March 2016, 80,000 Chinese students and academics were granted UK study visas, 39% of the total issued.

What does this mean in practice? For all its lofty ambition, OBOR is ultimately about money: the hundreds of millions spent on infrastructure are not just about direct job creation in the mills, shipyards and factories of China, but are actively helping OBOR countries modernise their economies so that they become the trading partners of the future.

Investment needs a financial infrastructure, and by being the first major European country to join the Asian Infrastructure Investment Bank, the UK has put itself at the centre of the delivery system. Furthermore, most banks in the West now use London as their renminbi centre and it is the biggest renminbi trading hub outside of China. This will help ensure that London is the world’s preeminent financial centre post-Brexit.

The new physical infrastructure, roads, railways, ports, airports, pipelines and energy installations will be funded by Chinese FDI, structured and managed via London-based financial institutions. The greater prize will be the UK’s role in the creation of the virtual infrastructure that will need to be developed in parallel. With a project of this size there are huge opportunities for British architects, civil engineers, engineering consultants, graphic designers, advertising agents, accountants and the many other service professions.

Thousands of deals necessary for OBOR can be negotiated in the English language, contracted under common law by UK legal firms, and led by international experts who are beneficiaries of British learning. Nearly £1000bn of FDI waits to be harnessed and a global vision realised; now is the time.

This article was originally published on FDI Intelligence.

Back to the Insight page

InvestUK is not regulated by the Financial Conduct Authority and the Financial Services Compensation Scheme established for the protection of investors does not apply.