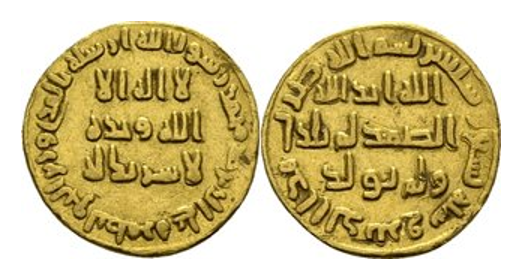 Numismatics (the study of coins) is a much-maligned discipline, arguably unfairly so.

For centuries and even today, most economic exchanges have relied on the dependability of coinage, capable of making and breaking both banks and empires. The study of coins can also reveal fascinating aspects of seemingly cloudy or ‘legendary’ history.

‘Abd al-Malik (r. 685-705 CE) is one of the most significant, yet mysterious Caliphs on record; he was the builder of the Dome of the Rock shrine in Jerusalem, a key linguistic reformer, army reformer and tax reformer. He created a blueprint for governance, which remained largely unchanged even under the Abbasid Caliphate during the Golden Age of Islam. Examination of the coin record under his reign reveals another of his key historic legacies as he was responsible for issuing the first classic Islamic coin, abandoning figural depictions in favour of religious calligraphy. This change has been long debated by Abbasid era ‘men of words’ and has recently resurfaced in Western academia with an intriguing conclusion stressing the economic drivers of reform. The Arab conquests of the seventh century were unprecedented, with the newly created state stretching from India in the East to Southern Spain in the West. In modern terms, perhaps not a great distance, but by the standards of the day it was immense – the Caliph in Damascus had to wait for two years for a report detailing news of his conquest of Andalucia to reach him. ‘Abd al-Malik standardised and economically bound together his new state through the introduction of entirely new coinage, signifying a departure from previous Christian and Persian coins in favour of a new economic entity.

I spent the summer of 2017 as a UNESCO volunteer working within the ruins of the striking Dutch Fort of Jaffna in northern Sri Lanka. We were excavating a trench in the centre of the multi-layered site, for the first time probing into the pre-colonial history of the site below the old garrison parade ground. Excavations began to reveal the remains of a Portuguese church beneath the turf and, under that, indications of an early pre-colonial Sri Lanka trading settlement centre on the edge of the lagoon. On one particularly hot day, we were processing excavated soil from these pre-colonial contexts through a wet sieve and a Sri Lankan archaeologist caught a glimpse of brilliant blue in the muddy water. As the wet soil gradually fell away from the object, we were stunned by the emergence of delicate blue glazed ceramic vessel, characteristically Islamic and part of ‘Abd al-Malik’s legacy.

This provides evidence of Islamic trade across South Asia and further enriches our understanding of a historical trade route travelled by Ibn Battuta and one which eventually led to the founding of the first mosque in 627CE China. This trade route was cemented by the discovery of Imperial Chinese pottery emblazoned with a three-clawed dragon, a symbol of official exchange. Collectively, these objects present a new history for Jaffna Fort, a world away from the established colonial story of the erection of a Portuguese fort, followed by that of the famous Dutch pentagonal fort and finally, a British colonial administration headquarters. This so happened to be where Leonard Woolf, the husband of the famous Virginia Woolf, began his career as a civil servant.

Sri Lanka was also visited by Ibn Battuta, a 14th Century travel writer, on his great journey across Africa and Asia from Mali to Kenya, to China and even Indonesia. He visited the island to see the footprint on the 2243 metre summit of Adam’s Peak, a famous pilgrimage site venerated by Buddhists as the footprint of the Buddha, Hindus as that of Lord Siva and by Muslims and Christians as that of Adam. Ibn Battuta’s account relates his journey to the peak more positively than his experience of ‘flying leeches’ in the south of the country.

One of the most intriguing pieces of travel writing I have come across is the tale of Ibn Fadlan, perhaps more unfamiliar to Western audiences than figures such as Marco Polo, but just as captivating. Ibn Fadlan is believed to be a tenth Century diplomat of the Abbasid Court in Baghdad. He was sent by the Caliph al-Muqtadir (r. 908-932 CE) as an emissary to the Volga Bulgars in order to discuss trading relationships and a potential alliance. His account includes a fascinating depiction of a traditional Viking sea burial performed on the Volga River by a group of ‘Rūsiyya’, most likely visiting Viking traders. The first record of Islamic coins in England, a Viking horde in Croydon from the late ninth century, likely passed through these same routes. Ibn Fadlan’s depiction is in fact the most detailed depiction of a Viking sea burial available to historians and is just as significant for students of Norse history as those studying the courts of Baghdad. One could also consider Sinbad the Sailor, appropriated from the Arabic epic 1001 Nights by European writers in the early nineteenth century. Fadlan’s story was similarly appropriated by Michael Critchon’s 1976 novel ‘Eaters of the Dead’ and later dramatised in the 1999 film adaptation ‘The 13th Warrior’ in a somewhat unfaithful interpretation of the history, saved only by Omar Sharif’s performance as Fadlan’s travelling companion.

InvestUK’s link with Ibn Fadlan’s tale of Vikings is not in fact our Client director, Eva Inglander, despite hailing from Sweden. The link is a fast-held belief that the cultural exchange brought about by economic factors is something to be as treasured and encouraged as wealth itself. Our evidence that far reaching economic ties are as healthy and well as they were hundreds of years ago comes every day in the experienced and intelligent innovators and investors who are interested in enriching the UK. In the same way that coinage relied on mutual trust and recognition to be exchanged across ‘Abd al-Malk’s Caliphate, we rely on the same bonds of mutual respect and cooperation today. Similarly, as Ibn Battuta and Ibn Fadlan’s encounters represent some of the most historically significant (and indeed exciting) tales of cultural exchange in the Medieval Period, cultural exchange in the modern period can be just as fruitful. It is through cultural exchange, often driven by economic exchange, that our world becomes exponentially richer as we find out more about ourselves and about others. This is a phenomenon that we at InvestUK are privileged to see every day, whether through job creation and economic success, or through our clients comfortably settled in the UK and mutually contributing to British society.

Back to the insight page

InvestUK is not regulated by the Financial Conduct Authority and the Financial Services Compensation Scheme established for the protection of investors does not apply.